Visit of the German Ambassador in Mekelle
A special highlight was the visit of the German Ambassador for Ethiopia, Mrs. Brita Wagener, with her 1st Secretary, Mr. Stephan Wendt in Mekelle. Together with members of Ethiopia-Witten association, responsible from the city of Mekelle and the University of Mekelle, she visited the Ayder elementary school for handing over computers and teaching materials. Then she visited the Ayder Referral Hospital of Mekelle University with its cardiac catheterization, pulmonology and intensive care unit. Finally she met the municipal fire brigade of Mekelle town with the fire department wagon, donated by the city of Witten and Etiopia-Witten. During the lunch in the well-kept Axum Hotel there were good opportunities to get to know each other. 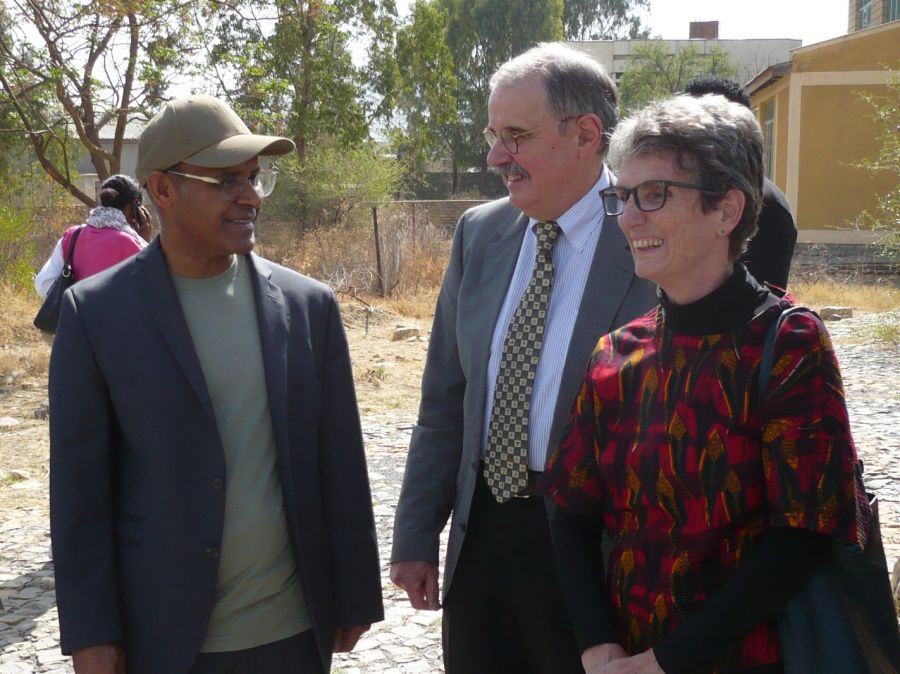 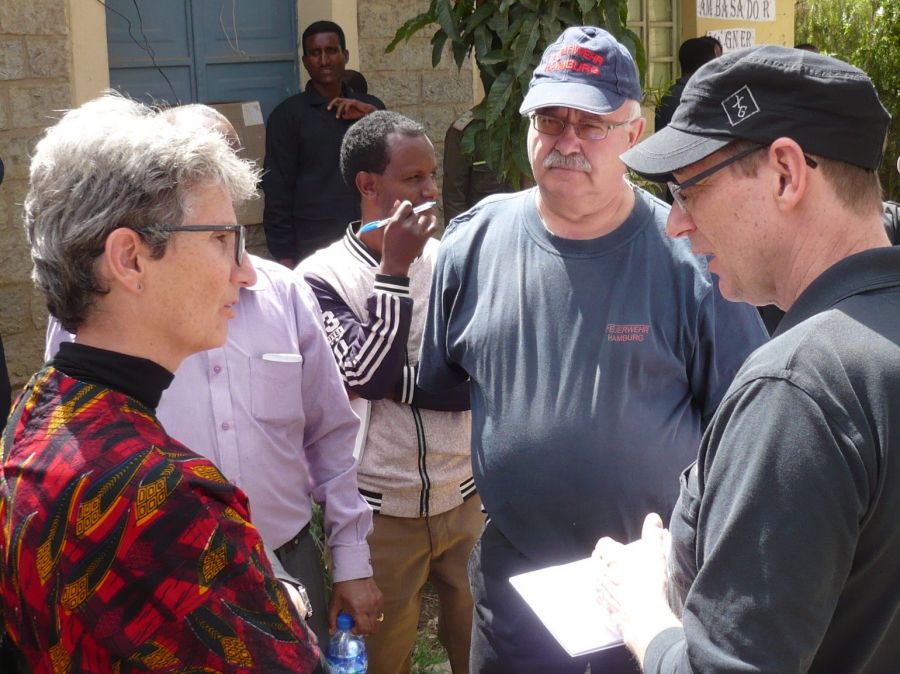 Medical cooperation and training in the Ayder Hospital
Visiting the Ayder University Hospital was again very satisfying for the German doctors. It was good to see that there was a surprisingly large, almost excessive influx of patients compared to previous years. Fortunately, the numerous specialist departments have also developed well. This applies to all by Etiopia-Witten supported departments, like Lung Diseases, Cardiology, Otolaryngology, Gastroenterology, Gynecology, Surgery and Intensive Care. Numerous new donated and self-funded equipment and extended facilities provide good support to the young Ethiopian physicians to work at an increasingly higher professional level in their own institution. 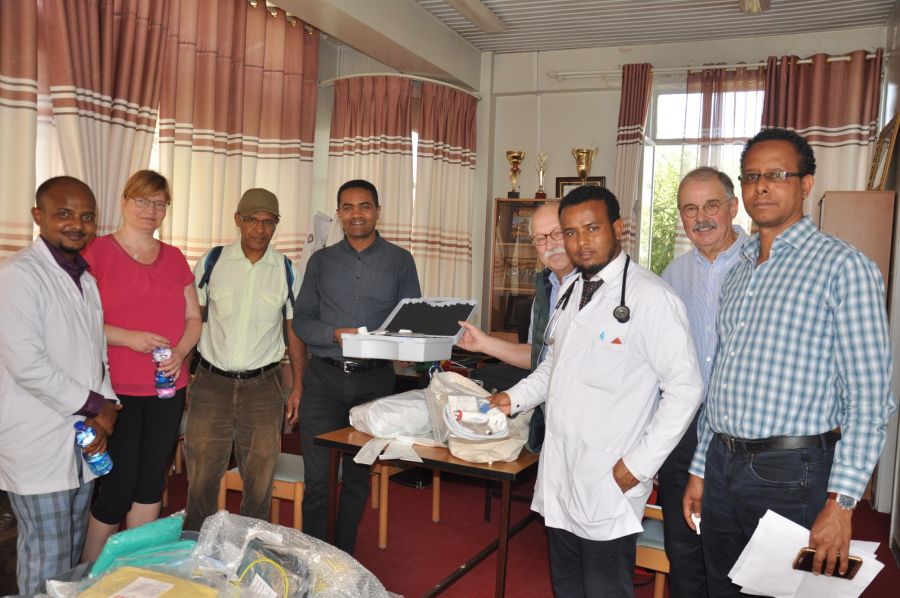 Program for the primary and secondary prevention of rheumatic heart disease (prevRHD)
As part of the joint activities with the Ethiopian project team of the University of Mekelle on the Etiopia-Witten program for primary and secondary prevention of rheumatic fever (prevRHD), the cooperation was further substantiated and deepened during visits to the ministries of the province of Tigray for health and education. Participation in an educational event in the form of a structured discussion for the rural population in the program area also revealed new aspects for the improvement of the educational work as well as the evaluation of survey results. Another issue was to ensure the supply of the population with penicillin by the health authorities.

Visit to the Etio-Education financially supported elementary schools
The two two-day visits to the four rural elementary schools (Holzkamp Bassale, Chelcon, Laelay Seken, Duramba), the members of Etio-Education and the teachers and students of the Holzkampschule were very impressive for everyone involved, in particular the already completed construction of the Holzkamp Bassale School whose foundation stone had just been laid during the German Week last year. A great impression was also made by the teachers and parents of the schoolchildren particularly because of the careful the careful furnishing of the rooms and the structural improvement Laelay school. As a recognition and incentive from the Etiopia-Witten association, the staff of the Lealay school receives a certificate of honor combined with a prize money of 2,000 euros. Regrettably, the large container packed with care from the chairman of the Ethiopia-Witten association, Ahmedin Idris, containing teaching materials, satchels and the numerous computers for the schools, had not yet arrived from Germany at Mekelle. Therefore, the promised gifts could not be distributed to the schools until a few weeks after our departure. 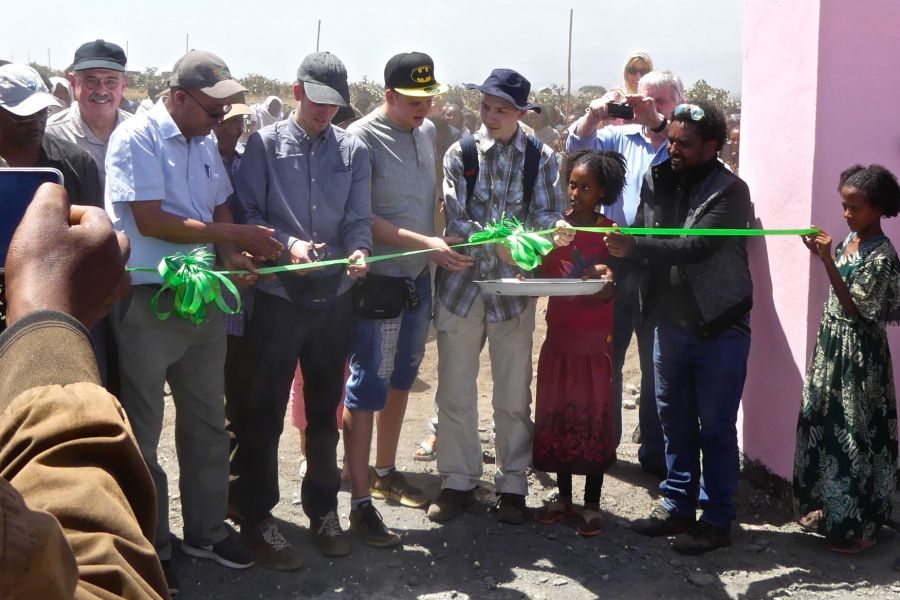 Supporting the fire brigade and police in Mekelle
The firefighter team from the fire station of the city of Mekelle, that the German firefighter Micheal Heiland from Witten town had extensively taught during the previous year, had been completely exchanged. So Micheal and Reinhard Paulsen from Hamburg started again to introduce the neue team how to use the new respiratory protective equipment. Again the necessary medical preliminary examinations in Ayder Hospital had to be done. An extension of the support in expanding the firefighting capacities for the city of Mekelle by the twin city Witten and Etiopia-witten was put in prospect . 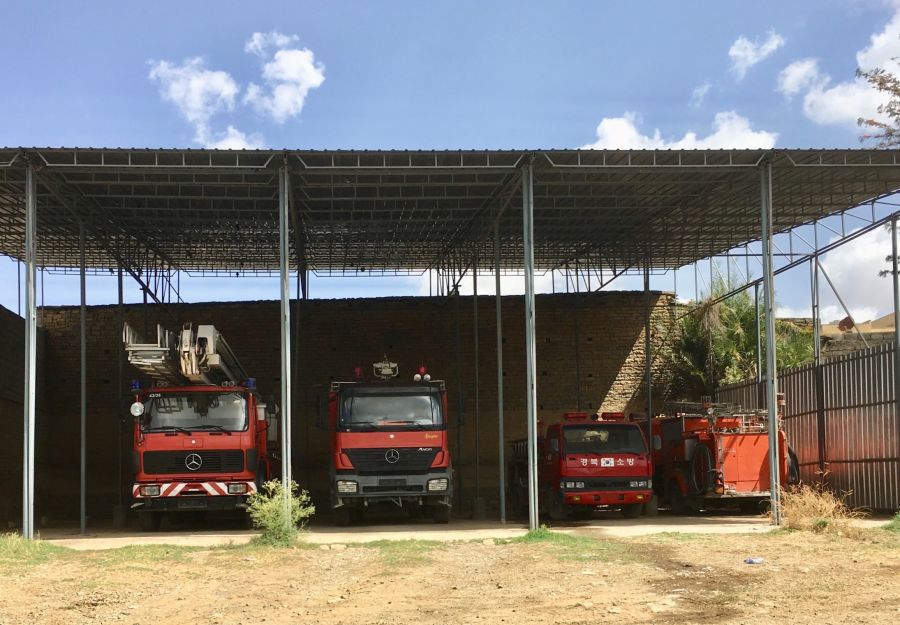 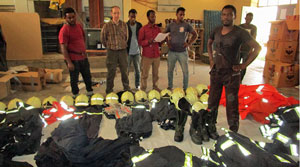 As in the previous year, a visit by a volunteer police officer from Herdecke Town, Thomas Bieber made it possible to discuss important aspects of policing in Mekelle and to plan new ways of future cooperation.

Consultation on the deepening of cooperation between sister cities Witten and Mekelle . At several meetings of envoys of the mayor of Witten Sonja Leidemann and the City Council with representatives of the administration of the Witten twin town Mekelle, in particular with the former mayor Daniel Asefa and the current acting mayor, new joint projects could be agreed.